What is ISO Image File

An ISO image is an archive file of an optical disc, a type of disk image composed of the data contents from every written sector on an optical disc, including the optical disc file system.
It usually has a file extension of .iso. The most common use of an image file is to write it to a blank writable CD, DVD or Blu-ray disc, resulting in an identical copy of the original disc including file name and volume label information.

If you download movies from the Internet, you will eventually encounter DVD or movie files saved as ".ISO" image files. These .ISO files are compressed files designed for use with burnable CDs or DVDs. You could burn an .ISO file to a disc and then play it in Windows Media Player. But that is a waste of both money and time. In this article, we will learn how to mount ISO image and freely play ISO files on Windows.

On Windows 8 and 10, Windows has the built-in ability to mount both ISO disc image and VHD virtual hard drive image files. You have three options. You can:

Once you've mounted the disc image, you'll see it appear as a new drive under this PC. Right-click the drive and select "Eject" to unmount the ISO file when you're done.

If you're using Windows 7, you'll need a third-party tool like WinCDEmu which will allow you to mount the BIN/CUE, NRG, MDS/MDF, CCD, and IMG image files that Windows still doesn't offer built-in support for.

After the new virtual drive letter is created, it's time for you to play it.

Part II: How to Play ISO file on Windows

Method One: Use Brorsoft Video Player

To play ISO file, a virtual drive should be installed on your computer in advanced. Launch the virtual drive and load the ISO file, then you can operate the same way as playing Blu-ray disc. 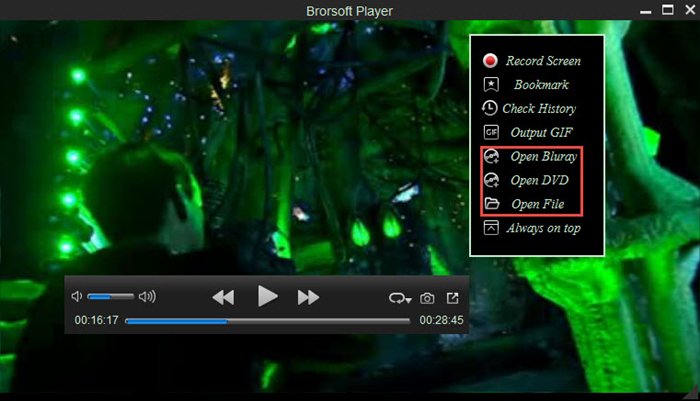 VLC Media Player is the most advanced yet portable multimedia player which supports a wide variety of formats like MPEG-4, MPEG-2, MPEG-1, MP3, and DivX even VCDs, DVDs, and several streaming protocols.

Install and run VLC Media Player on Windows, choose Media > Open File. You will get a browser-like dialog to choose the most wanted ISO image, then click "Open" button to play the content in the ISO file immediately.