Use Handbrake Alternative to Convert Blu-ray to WMV with Dolby TrueHD 7.1 Audio Preserved

Blu-ray comes with lossless audio quality. If you are obsessed by high quality sound experience, you are definitely love Blu-ray audio. Blu-ray audio thus offers up to the 7.1 channel HD sounds so that you can tell the differences even if you don't have a matching media center or home theatre system.

Dolby TrueHD sees its most popular usage as a high definition audio codec for Blu-ray Disc. Some early Blu-ray players did not support Dolby TrueHD coding, and in some cases, the player would resample it as standard Dolby Digital. All current Blu-ray players support Dolby TrueHD, along with the ability to upmix the source to a higher resolution format (Bitstream or LPCM), or downmix to a lower channel format depending on the player or equipment’s requirements. However, by late 2009 and early 2010, Dolby TrueHD had been steadily losing the lossless audio market share to rival DTS-HD Master Audio. This trend is inverse in case of 3D audio with Dolby Atmos encoded Dolby TrueHD releases outnumbering competing codecs.

“Was wondering if there were any free options available for converting my Blu-ray rips in a way that will keep the TrueHD and LPCM audio tracks to passthrough to my AVR? I’m using a Blu-ray ripper to rip and Handbrake to convert to MKV and that works great for DTS-HD and all other audio tracks but since Handbrake doesn’t support TrueHD and LPCM I was trying to figure out if there’s something else I can use for those?”

Just as Handbrake needs VLC 64bit to read encrypted DVDs, neither HandBrake 0.10.5 or 1.0.3 can decrypt and rip any protected Blu-ray discs. And, many user complained Handbrake can't passthrough 7.1 TrueHD. So, ever considered looking for an alternative to Handbrake to rip Blu-ray with TrueHD 7.1 keeping? If so, find out in the following paragraphs.

How to Rip Blu-ray Disc with Dolby TrueHD 7.1 Audio Preserved

Insert your disc to your Blu-ray drive, and launch the Blu-ray Ripper; click the disc button to import your Blu-ray movies to the program.

To keep TrueHD 7.1 audio, you can hit the Format bar and choose Common Video > WMV3(WMV9)(*.wmv) as the output format.

It provides the 7.1 audio channels for you, so you can get the Dolby TrueHD 7.1 audio saved. 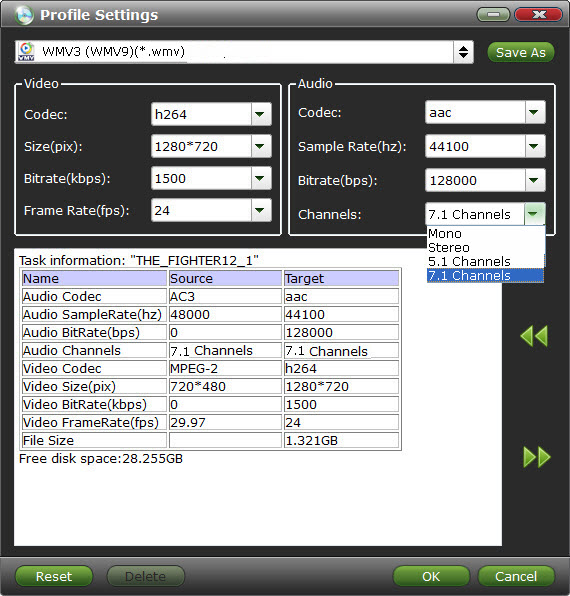 Click Convert button to start converting Blu-ray to WMV with TrueHD 7.1 pass-through for your home theater with wonderful enjoyment.

The original video compression format used in the file, also known as WMV, was originally designed for Internet streaming applications, as a competitor to RealVideo. The other compression formats, such as WMV Screen and WMV Image, cater for specialized content. After standardization by the Society of Motion Picture and Television Engineers (SMPTE), WMV 9 was adopted for physical-delivery formats such as HD DVD and Blu-ray Disc.

There is an audio file similar to Windows Media Video, called Windows Media Audio, abbreviated as WMA that only contains audio data – no video.